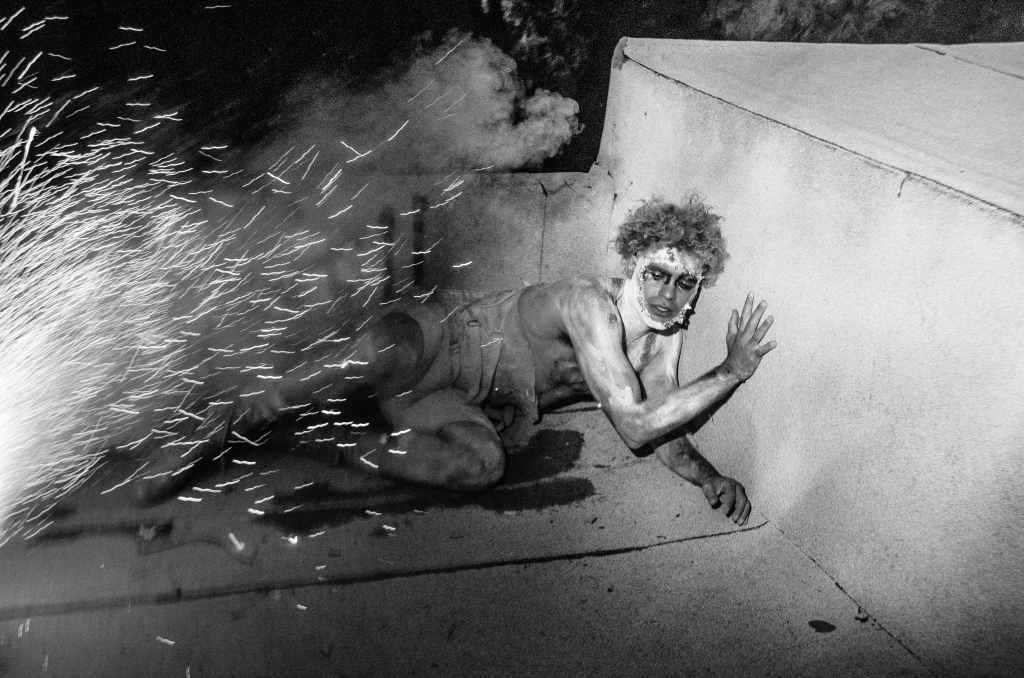 Also published in print and online by The Pride LA.

As a child growing up in Manhattan, Los Angeles-based performer, Enrique Jesus Hernandez, called 911 more times than he can remember. “My mom was essentially a single mom, and unfortunately in her relationships, there was a lot of violence,” he said.

Countless trips with his mother to the E.R. and an incessant cycle of abuse left young Hernandez numb. Only as an adult, and away from the violence, was the artist able to begin healing childhood traumas and he used music as the tool.

Through his E.P. Hunger City, Hernandez wanted to send a message of hope to others experiencing similar suffering. Inspired to do more through performance, after the release Hernandez created gAYGUTs a monthly event at Boardners in Hollywood where healing happens through performance and art, and anyone Queer in Los Angeles can experience community.

In his song The Base Hernandez sings, “there’s a base in my brain I stand there stunned, and my bones remain encased.” He said this explains the “shutdown element” that is the only way a child can escape a situation where they are trapped, powerless while a parent suffers domestic abuse.

“There’s a base in my brain I stand there stunned, and my bones remain encased.” – Enrique Jesus Hernandez

“The overwhelming state of my circumstance would just numb me, and I’d go to this place in my brain where I was in some type of case…That’s where I’d go so that time would go by and if time went by then the sun would come up, and if the sun came up it was time for school, and if it was time for school I’m out of the house. Time was always on my side; if I could just hold onto this, thank God time continues to move forward without me having to do anything with it,” said Hernandez of being a small boy enduring the attacks upon his mother.

In other lines of the song, Hernandez sings that the walls keep giving him their backs. Explaining that the barriers a victim builds for protection can ultimately block outside help. “This cycle of trying to protect oneself but then also preventing resources to come in results in this paralyzing hopelessness,” he said.

“I want them to hear this and think if this piece of music exists in the world, then it means that it has happened with someone else which means that ‘I’m not the only one’ which means that there might be hope.” – Enrique Jesus Hernandez

The feeling of hopeless a victim suffers is something Hernandez wants to help eliminate in those listening to his music. “I want them to hear this and think if this piece of music exists in the world, then it means that it has happened with someone else which means that ‘I’m not the only one’ which means that there might be hope,” he said.

The gAYGUTs live show, held once a month at Boardners in Hollywood, is an extension of this concept. The idea that no one should feel isolated suffering through any situation in which they find themselves alone. Unity Through Vulnerability is the gAYGUTs mantra.

Entertainment for the evening varies from pop to rap, spoken word to any manner of performance art. What unites the night is that it is a safe place for Queer artists to spill their “guts” something Hernandez hopes leads to having “really truthful expressions of Queer Artists be normalized.”

Once a month gAYGUTs happens at Boarders in Hollywood at 1652 N Cherokee Ave, Los Angeles. Follow @_gAYGUTS_ on Instagram for show dates.

Enrique Jesus Hernandez will be performing Hunger City at Long Beach Pride on Saturday and Sunday, May 18 and 19.

On Monday, May 13, gAYGUTs is teaming up with Queer Mondays Long Beach for a  pre-Pride show.

iThere are no comments

The life of a #solopreneur doesn’t have to be a lonely one 💖 Hear the story behind the @forwardfemale a co-working space in the #dtlaartsdistrict that offers community and accountability. 🔛 swipe for more pics 🔝 #podcast link in bio 💖 Thank you @priss_presley and @lifeoflaurencheek 💖 . . #beautifulhollywood #womensupportingwomen #womeninbusiness #wcw
How do you get it done? 💪 Lauren Cheek and Priscilla Presley say research shows you have ninety-five percent more chance of success if you are accountable to someone other than just yourself. With that in mind, these two women created The Forward Female. This new co-working space in the Downtown L.A. Arts District offers members monthly check-ins to help keep projects on track. Hear the story now on Women, ROAR! #Podcast up now. Link in bio 🙌 🎤 💖
Happy back to it after the weekend. Welcome to #gratitude week 🦃 What is the seemingly most insignificant thing you are #grateful for? For me, it is unicorn wigs, croissants, and coffee. 🦄 🥐 ☕️ Ok. That is 3. And, that is OK. It’s the little things that get us through, I reckon. When I was going through a divorce in 2015 so much bad stuff happened I felt I was drowning. In one month alone, my Dad had a stroke, my dog (who was the only thing I was staying alive for at the time) died, and ten federal agents barged into my house, shoved guns in my face, and demanded I tell them where my ex -who has left me- was. I had no idea. I told them he could be in NYC with his 21-year-old girlfriend who may or may not be a stripper. Although, I said I couldn’t be sure she was a stripper but I had heard he’d met her in Vegas and, I told the agents, when I had stalked her Instagram I noticed all the strip clubs followed her but then, I said, she could just be a party girl because I had also stalked her Facebook and it looked like she went to college in New York. I literally said all of that while doubled over with my hands up, as if they were somehow a match to ten guns 😐 What got me through that year was coffee, croissants, and unicorn wigs. Everything else sucked. The future was not bright. So, I would walk to @menottis or @gjelinatakeaway and get a coffee and croissant and just focus on that for a short moment and let myself forget about all the stress. I realize now, that year was a lesson in tapping into the #powerofnow @eckharttolle-style 🙌✨ And, the unicorn wigs were total escapism which I think is just fine ☺️ So yeah, it may not seem very deep to say you’re grateful for chocolate or bubble baths or bright red lipstick 👄 but it is from little things that big things grow ❤️❤️❤️ Here’s to anything that gives you a moment of happiness AND may your moments of happiness land more and more as you take the time to notice them ❤️❤️❤️ Oh, and by the way, I discovered @traderjoes have the BEST mini croissants in their frozen section 🙌🥐
“If you’d told me at the moment when I moved to Los Angeles and I was having difficulty getting out of bed in the morning that two years from now this would be the situation, I would have laughed in your face. It just seemed crazy impossible,” said @alixpeabody CEO & Founder of @drinkbev From medical debts to sparkling rosé in a can hear how Alix is #breakingtheglass with her mission-driven Venice-based beverage company. Check out the full story in our Beautiful Hollywood podcast series Woman, ROAR! Up now ⚡️🧡⚡️
💕Everything you want is on the other side of fear💕 - Jack Canfield 💖🧡💖🧡💖 • Beautiful Hollywood was @drinkbev HQ in Venice talking to founder and CEO @AlixPeabody about her female-first beverage brand Bev 💖 • Bev is a mission-driven #breaktheglass beverage company that has risen in a real phoenix from the ashes story. Alix got sick, really sick. After collapsing in agony suffering an ovarian torsion, which is a serious medical condition where the ovary twists cuts off the blood flow, Alix was in and out of surgeries that left her with a huge debt. Bev grew out of a risky plan to pay off that debt. Catch the story in the latest Woman, ROAR! podcast.🧡💖🧡💖🧡💖Link in bio 💖🧡💖
Bev is a mission-driven #breaktheglass beverage company that has risen in a phoenix from the ashes story. Founder and CEO @alixpeabody got sick. Really sick. She was in and out of surgeries that left her with a huge debt and @drinkbev grew out of a risky plan to pay off that debt. Hear the story. Beautiful Hollywood Woman, ROAR! Podcast up now. Link in bio. Beautiful 🧡