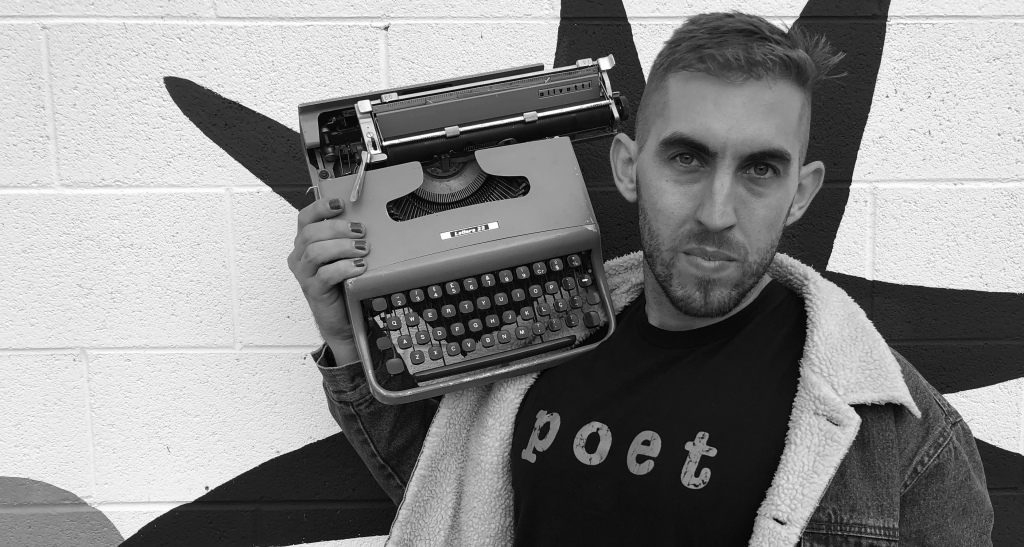 It started as an experiment. Brian Sonia-Wallace wanted to see if he could pay his rent through poetry. From here, his journey as Rent Poet began.

Working with numerous social justice and arts non-profits since college, in 2014, the poet found himself in between jobs.“I was at a point where I was looking to take just a minimum wage job,” he said, holding him over until something more substantial came along.

However, after doing the math on California minimum wage and comparing what he’d earn working a retail job versus busking on a street corner as a poet with a typewriter, he decided to hit the streets.

Initially, those in the poetry community thought Sonia-Wallace was crazy.

“It was actually funny, I went to different poetry venues, and I talked about what I was doing, and all the poets rolled their eyes and were like, ‘yeah good luck with that.’” Those who did support Sonia-Wallace’s artistic endeavor were the least likely. “The bankers and real estate people were like, ‘this is fantastic! Can we pay you to come to do poems at our events’ and the poets were like, ‘yeah, you’ll never make money like that,’” he said.

Sonia-Wallace describes himself as falling into a weird space somewhere between a Capitalist and a Marxist. “In the sense of thinking about art as labor,” he said explaining, “we have this idea that art is a great thing for kids and self-expression and therapy and those are all sorts of personal pursuits,” for which we don’t expect to be paid.

Whether he sets up on a street corner or at an event full of investment bankers, his job as Rent Poet is always the same. He asks a couple questions, “who the poem is for, and what is the subject?” Then, after ten minutes or so, tapping on his typewriter, he crafts a one-of-a-kind poem.

There are limits on what Sonia-Wallace will write as Rent Poet. He once turned down a man who asked him to write something to help win back an ex-girlfriend.

The poet believes poetry is a tool that “has a lot of potential to connect to people.” Quoting Lawrence Ferlinghetti’s “Poetry is the shortest distance between two people,” Sonia-Wallace agrees poems are, in a way, like spells. “I do think people, in a relatively secular age, come to poetry for things that they would have gone to a shaman or a witch or a potion maker for,” he said.

There are limits on what Sonia-Wallace will write as Rent Poet. He once turned down a man who asked him to write something to help win back an ex-girlfriend.

“There’s a bit of Neuroscience that says when we hear a story our brains are patterning themselves in the same way that the person remembering and telling that story’s brain is patterned. Which is just like the Neuroscience of empathy. If you are telling someone a story or a poem, it is as if you are making their brain be your brain for a moment,” said the poet.

Poetry is the shortest distance between two people.

After a couple of years as Rent Poet, in 2016, Sonia-Wallace published his first book, I Sold These Poems, Now I Want Them Back, inspired by his experience as a poet for hire. His role as Rent Poet has landed Sonia-Wallace in a series of unlikely writer residencies. One with Amtrack, another on the road as a poet in residence for a political campaign in Tennessee. In another, Sonia-Wallace found via Facebook, the poet set up his typewriter and wrote poems at the Mall of America in Minnesota.

The Mall of America gig led to a New York Times article, which led to Sonia-Wallace getting a second book deal through Harper Collins. That book is due for release next year, 2020. “I’ve just done all of these very Americana poetry adventures,” said Sonia-Wallace and this is what the book is centered around.

I do think people, in a relatively secular age, come to poetry for things that they would have gone to a shaman or a witch or a potion maker for

For Pride month, the poet is staying closer to home.

As part of the City of West Hollywood’s One City One Pride LGBTQ Festival, throughout June, Sonia-Wallace is running Everyone Deserves (A) Love (Poem), a Pride poet pop-up interactive installation where queer poets armed with typewriters will set up on the streets of West Hollywood and type you a poem.

City of West Hollywood Arts Coordinator, Mike Che, told Beautiful Hollywood the pop-up is “an interactive art project where anyone can get a love poem written for them or someone they love, in celebration of this year’s One City One Pride theme; Love is Love.”

A week or so ago, May 22, on Harvey Milk Day, Sonia-Wallace and team of typewriter poets worked the first installation to kick-off One City One Pride. “Everyone who received a poem left with a smile on their face, which is I think the best thing this project could accomplish,” said Che. As Sonia -Wallace said, “words are how we record our thoughts and put them in other people’s heads.”

That is the power of a poem.

Listen to the Beautiful Hollywood Podcast with Melanie Camp and hear Rent Poet share his story.